During that time I have had the pleasure of working alongside and meeting some wonderful people, who have made the delight of exploring the Ionian Sea a pleasure.


I met Nicos and Eleni for the first time in 2014 when they came on the Lady O for a cruise. They returned the following year and the year after that!

Meanwhile I continued my summer and winter work in Kefalonia and married in 2015 to my lovely wife Dimitra and in Νovember 2016 we had a baby girl.

We soon became friends with Nicos and Eleni, and together with our mutual friends Sonia and Andrea from Pavia we spent many summer evenings eating, drinking and sharing dreams.
﻿ Nicos and Eleni shared their dream of one day living in Kefalonia permanently and they began their quest to buy land or property. Being a permanent Kefalonian resident I was more than happy to help them in any way I could. Choice was not an issue as there were lots of properties and land for sale all over Kefalonia, but finding the right one for them was proving difficult.

To my delight I received a surprise phonecall from Nicos in March 2016. He told me he was coming to Kefalonia in April with Eleni to take part in a UK TV show ‘A Place In The Sun’ and explained they specialised in searching overseas properties.﻿﻿ 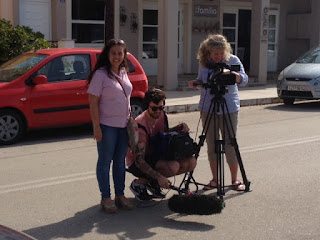 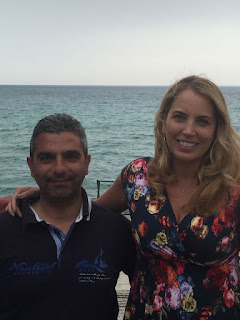 
Nicos asked for my local knowledge and we spent 3 days together. FINALLY Nicos found some land that he loved and he began the process of buying it with the intention to build their dream home. It was in a great location, with a great view, at a competitive price.


He returned in the summer with Eleni, Sonia and Andrea. Dimitra and I couldn’t wait to hear the update. Sadly the news was not good. They explained that they almost reached the point of completion, but it turned out they couldn’t build on the land and they had lost money in the process. That was not the news we were expecting.

Completely put off and licking their wounds they decided they did not want to buy land or property. Plan B was in motion! They would rent instead! At first we all simultaneously shouted ‘Nooooooo don’t give up!’ But their minds were set. They explained all the benefits of renting instead and it made sense.

They say everything happens for a reason right?

Well it just so happened to be that while Nicos and Eleni were at this crossroad in their life, I too was at a crossroad with decisions to make. My partner explained that due to personal circumstances he needed to get out of the business and could not be my partner in 2017. Having worked together for 3 seasons I was very sad but understood. Would I sell Lady O or find another partner? Loving the sea, Lady O and meeting and socialising with people, I couldn’t imagine life without Lady O. 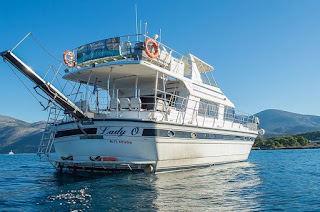 
I had to explain. Everyone was shocked and sad but Nicos was interested and asking many questions. Meanwhile Andrea was excited and thought Nicos and I together was a great idea! The evening ended and we went our separate ways but Nicos and I were thinking about this possibility.


Nicos and Eleni returned to the UK and over the following few weeks Nicos was doing his research. He came back time after time with this question and that question. But the summer season was now over.....and time was running out.


And so here we are. This is our new website and we will be writing regular blogs and keeping you updated on Kefalonia Cruise events, offers and summer fun.