Down the Rabbit Hole!

Posted by Kefalonia Cruise Lady O on April 27, 2018
When in Argostoli we always take a trip 'Down the Rabbit Hole' . An emporium of quirky inner magpie feeding pieces most of which are created by the owner Karen Fozzard.

A Yorkshire lass who describes herself as the 'love child of David Lynch and Morticia Addams' and who decided to jump from her comfort zone 10 years ago and move to Kefalonia, a place she says is somewhat like wonderland, where the colours are too vivid and everywhere is a photograph awaiting to be captured by your eyes.
A place where sensory overload seems to be the norm, from the smells of orange blossom, jasmine and pine permeating the air to the sounds of birdsong, crickets and cicadas' creating the theme tune for every day life and where it sometimes feels like a total madhouse.
The backdrop of all of this gives Karen her inspiration for the paintings and jewellery she makes, from mermaid pieces to Frida Khalo to Angel wings, there is always a reason behind the items, it could be from watching the ocean crashing on the rocks to gazing at the myriad of stars, like tiny diamonds on a black velvet jewellers cloth, it all features in what she makes. 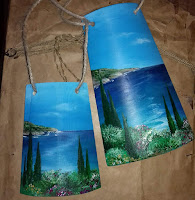 Moving to the Island was a large jump from being a Monsoon manageress to become an overseer of an interior design project which when was finished she painted several murals around the Island and then turned her hand to conjuring cocktails, all the time painting and making pieces of art and jewellery which slowly began to take over her house, at which point she decided to open a shop. 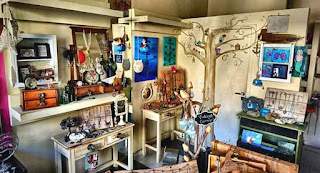 The story of this is rather amusing as when telling her plans to an accountant they told her it was 'Mission Impossible', a foreigner, a woman at that wanting to open a business, one the like of which Kefalonia had never seen before? She just gave them her usual grin, showed them one of her tattoos which reads “ Sometimes I believe in as many as six impossible things before breakfast” and then hummed them the mission impossible theme tune!

A month and a day later, the Rabbit Hole was born. As she says, if she can do it then anyone can. Go check her out, the Rabbit Hole is situated on the Kabana Square....just follow the White Rabbit. She will welcome you with a Cheshire Cat smile 🐱


down the rabbit hole hand made jewellery Karen Fozzard