Posted by Kefalonia Cruise Lady O on May 14, 2018
It’s difficult to write a blog when you weren’t even there! But from Nicos, Dennis, personal messages, as well as great photos from Orfeas Georgakis and the volunteers, I hope I can give an accurate account of the day.

When I initially advertised on facebook for volunteers to help clean Vardiani Island I was unsure how many people would respond. But there was so much interest I only advertised on Loving and Living Kefalonia and Kefalonia Unplugged. The word got out though and we had a few volunteers from Kefalonia by Us also! Unfortunately it turned out we could have had more volunteers as a few people had to cancel at the last minute for various reasons, but we still had a healthy number of 22.
Although I am in the UK I was in contact with Nicos & Dennis throughout. I gave them the final count, names, dietary requirements etc the day before and my work was complete. For now!

Nicos went shopping! He bought wine (the most important item!), vegetables for the salad, melon and then returned to the boat. The crew were getting the LadyO all cleaned up ready for her guests. The meat was bought fresh early in the morning which is why it tastes sooooooooooooo good!

Dennis and Nicos had been to the island a few days earlier and knew they needed to buy lots of dustbin bags and gloves! Very kindly even though Mick Brunt was unable to join the clean up he bought us a gift. A litter picker which I believe came in handy!

On Sunday 13th May, the morning of the clean up cruise, Dennis submitted the manifesto to the port police and they set off from Argostoli approximately 10am. Areti our host, ensured the guests were welcomed with coffee and soft drinks.

Nicos made the usual Health & Safety announcements and explained  the itinerary of the day, and on the way the LadyO passed by the fish farms before zipping  across to the island.

Once they arrived Dennis took the volunteers across with the tender, but Colin and Maggie from Vassaliki Naturist Resort decided to jump off the Lady O and swim across. Thank goodness they remembered their swimwear! 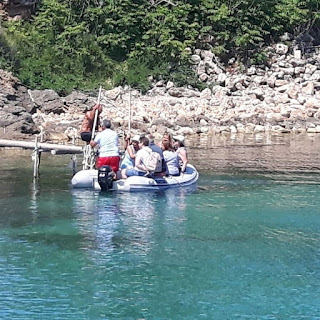 Volunteers were given bags and gloves and they got busy! Initially from the front the island didn't look too bad, so everyone went their separate ways exploring, some going toward the light house, others to the wooden shipwreck on the other side of the island, and others here there and everywhere.

From what Dennis tells me not a stone was left unturned! It took over 22 volunteers 2 ½ hours to clean the island. Due to the red soil and no wind it was very hot, so to say it was hard work would be an understatement. 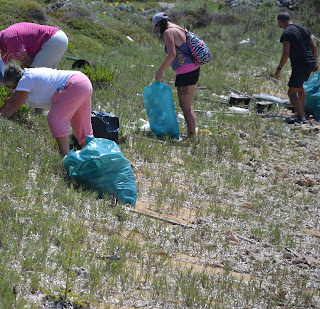 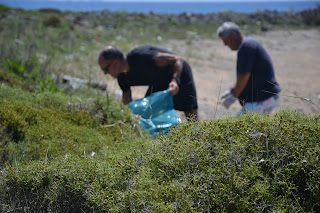 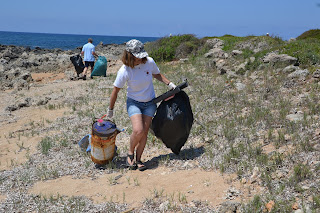 Volunteers kept reappearing with filled bags, collecting an empty bag and were off again, only to return when that bag was full! They did this over and over again. I believe the final count of bags filled with rubbish (mostly plastic!) was over 40! 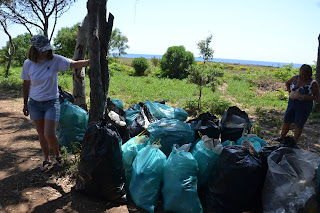 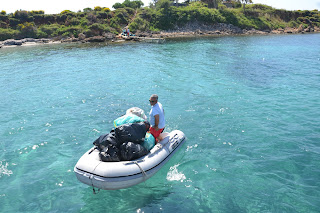 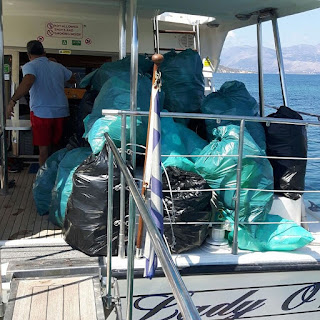 Once the clean up was complete, Dennis & Nicos called everyone back as a well deserved BBQ lunch cooked by our super chef Andreas Choinis (although he does so much more than just cook!) was almost ready! Freshly cooked pork and marinated chicken souvlaki was served with salad, pitta bread, Tzatziki and and plenty of wine......followed by freshly cut watermelon for desert of course! 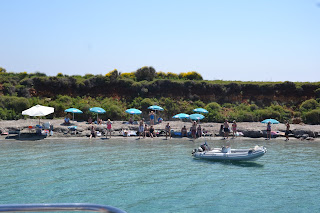 Now those of you who know Dennis will know that he also can’t help but put on a bit of music on after lunch for a spot of dancing! A few weren’t so keen at first preferring the tranquility the island has to offer, but they soon warmed up and a few even danced!

After cleaning, eating, drinking and dancing the time had come to get back on the LadyO taking the rubbish with them. The bags filled up half of the rear deck so Dennis & Nicos continued the dance entertainment upstairs! The obligatory Pole Dancing of course!


If you weren't in the mood for dancing or simply aching from all the hard work, the lovely Christina from Kefalonia Massage and her son Orfeas who is also a member of her team, was there to give a 10 minute massage to anyone needing a bit of TLC! 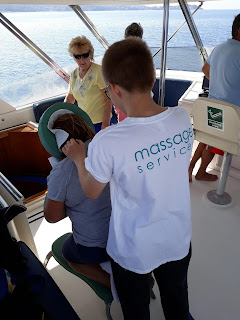 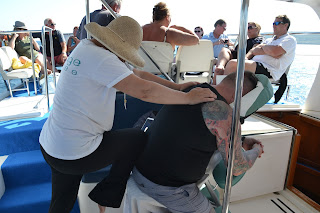 At the end of the day the volunteers surprised the crew with a whip round as a thank you  for their hard work. But the thank you really is all ours. We couldn't have done it without you!

We'd like to say a big Thank You to;

They had such a lovely day that they've already volunteered to do it all again next year!

We were also given an ARK collection box  (Animal Rescue Kefalonia) so future guests of the LadyO can contribute to the worthy charity.

After the volunteers left the crew still had work to do. They took the bags off the LadyO and filled up the big bins you see on the roadside. But there were so many bags they wouldn't all fit and so they were left beside the bins as they are emptied daily.

But a complaint was made by one of the local bars and the bags had to be moved which put only a very slight damper on the day. Once that was done the crew finally went home, tired after a long hard day (Yeah right all I saw was dancing!).

But they wouldn't have it any other way! 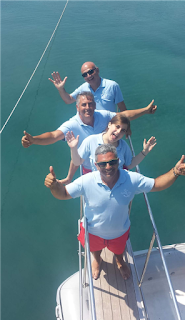