Posted by Kefalonia Cruise Lady O on August 21, 2018
Logos Grand View sits on a hill above Lassi. From Lassi Road you can see a ‘Hollywood’ style sign in big white lights clearly signposting it’s position. With award winning cocktails and fantastic sunset views, this is the place to come.

When I asked Spyros what gave him the idea to open a bar so high up in the middle of no-where he instantly replied smiling ‘My dad.’ He shared with me a beautiful story; the dream his parents had.
This blog was meant to be about FANTASTIC cocktails but on hearing the story I completely forgot to ask him how Logos Grand View became famous for it’s cocktails!

So of course I am going to share with you the story of a mans dream and then talk about cocktails!! 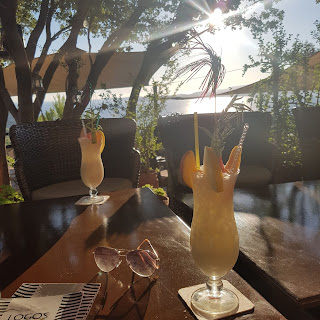 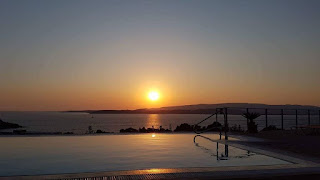 And so the story begins with his grandfather. The land originally belonged to his grandfather who was a shepherd. To avoid his livestock straying onto adjoining land he bought that land too. He kept buying adjoining land until he eventually was the owner 24,000 square meters of land! He then gave the land to his son, Stefanos, Spyros's father.

In 1975 Stefanos married and took his new bride up the hill to show her the land. At the time the land was just fields and forest land, and building was not permitted. They sat on top of the hill overlooking Lassi and that was the moment a dream of opening an Ouzari (small snack bar) was born.

But life took over as it does and the dream did not become a reality until their two sons Spyros and George were grown up.

Together Spyros and George made it happen. Logos Grand View was born! 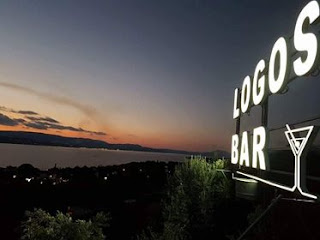 Spyros and his brother George opened the bar in 2012. At the time there was no road, water or electricity. They literally had to start from scratch. It originally had 25 chairs and was only 30 square meters in size. As it became more popular there was no space for his parents to sit so they would sit on a cement wall, proudly watching their sons working and talking to customers. But just like their grandfather they didn't stop there. When the Greek building laws changed they were able to extend and did so each year.

Known for it’s cocktails and sunset view, Logos Grand View would open at 5pm-3am. But in 2016 they built a swimming pool and now it opens at 9am each day. Now it seats approximately 100, with a pool, apartments (Stefanos Studios) and 70 sunbeds spread out comfortably. The pool is open to the public as well as those staying at Stefanos Studios. George runs the pool bar in the day time while Spyros, his wife and 3 daughters Erica, Stefania and Christina run the bar in the evening. 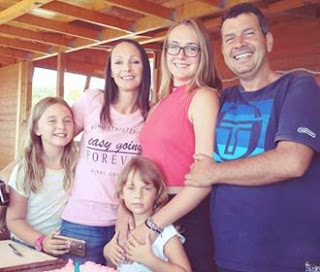 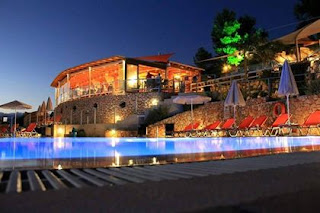 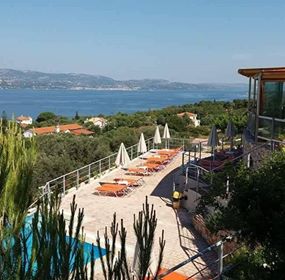 Sadly Stefanos passed away in November 2017 of a sudden heart attack while watching football at home with friend’s, which he loved to do. I was so shocked and sad to hear this I stopped typing my notes and just sat for a moment..............but Spyros smiled proudly.

It may have taken 42 years but together Spyros and his brother George had made their fathers dream come true. Stefanos got to see Logos Grand View become what it has become today before passing away. What a great success story not just from a business point of view but also a personal family achievement and this gives them great comfort. 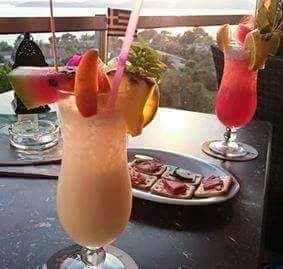 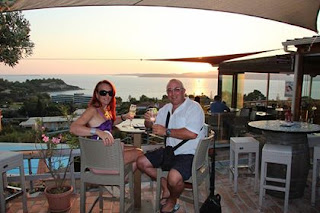 They take great pride in ensuring each cocktail looks and tastes good. As well as amazing cocktails they also provide snacks and a great meat variety dish for two which I recommend. The burgers are made by their mother and they ARE yummy. 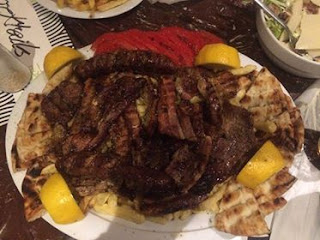 Take a trip up to Logos Grand View. You won’t be disappointed.

"Absolutely love this place, the breathtaking view and the magical sunsets. The fabulous cocktails and the warm welcome always from the owners.  We love this place and never miss a few visits every holiday".
Debbie Michelle Robson

Directions: By car and by foot from Lassi Road. In between Il Gabbiano restaurant and Etam is a small road for cars and petestrians. Alternatively at the top of Lassi turn right (Opposite Dolphins super market). Follow the road straight which eventually becomes a dirt track road. Logos Grand View is on your right hand side. You can't miss it!


On the 5th September 2018, literally weeks after posting this blog,  Spyros & George's mother passed away suddenly of heart failure, joining her husband Stefanos.
May they both Rest In Peace
xx