Posted by Kefalonia Cruise Lady O on August 05, 2019
Vegetarians and vegans please accept my apologies in advance for this blog!
This one’s for the meat lovers out there!

Greeks are known for loving their food and having a healthy diet (if you exclude the yummy cakes and pastries! But for now let’s not talk about them either!!)

Many Greeks grow their own fruit and vegetables and as you explore Kefalonia you’ll see lemon trees, orange trees and olive trees in abundance. With their home grown vegetables they’ll make the most amazing dishes.

But they are also known for being a culture that love to eat meat, with popular dishes such as Kefalonian meat pie, Kleftico, Stifado, Pistachio, Moussaka, meatballs and so much more.

Then there is Souvlaki...simple in comparison to many of the traditional Greek dishes.
Due to its simplicity Souvlaki has become a popular fast food meal consisting of small pieces of meat, usually pork or chicken but can also be lamb. Cooked on a BBQ or grill on skewers it’s often eaten straight off the skewer. 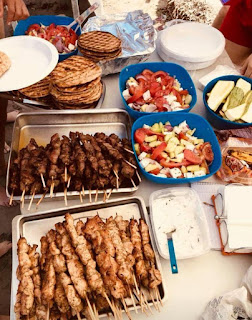 This way of cooking has an ancient history in Greek culture that goes right back before the 17th Century BC. Excavations in Greece have unearthed stone cooking supports with indentations that were likely used to hold skewers.

Back then the meat would have been served on it’s own. In the present time Souvlaki is served in various ways. It can be served with pita bread, fried potatoes, lemon, salad, rice and sauces.

Souvlaki is served in all Greek restaurants and some ONLY serve souvlaki!

On our famous BBQ Cruise, Pork and Chicken Souvlaki is cooked on a BBQ on the beach and is very popular with all of our guests. Served with Greek salad, pitta bread, tzatziki and wine!

We do provide alternatives for vegetarians and vegans so everyone is catered for :-)

1. Place the cubed chicken and all the ingredients in a bowl and mix well with your hands. cover and allow to marinade for an hour.
2. To avoid your skewer sticks from burning when cooking your souvlaki, soak them in water!
3. Thread the chicken pieces on the skewers comfortably. Avoid squashing them together too tightly as they won't cook properly.
4. Cooking time depends on whether you are using your cooker grill or cooking on the BBQ. On the grill it takes approximately 20 minutes, on the BBQ between 8-10minutes (turning frequently)
5. Serve with...whatever you like!